The Underworld of the Macuxi 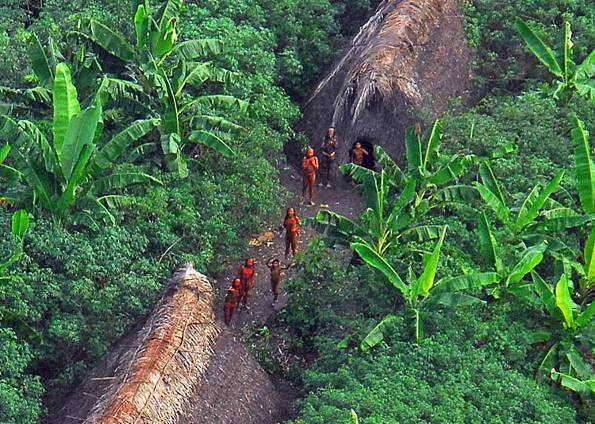 The last Macuxies (from the northern Amazon) tell us that, until the year 1907 they entered a cavern and walked from 13 to 15 days until they reached the interior. There, "at the other side of the world", live the "big men", who measured from 10' to 11'6". They're really nice but you have to follow their indications.

The main motto of the Macuxies of this place, was to look out for the entrance of the cavern, keeping out everyone who was not an authorized member of the tribe. When the great wind wich ran through the great tunnel began blowing outside, (it had a rhythm of 5 days blowing out and another 5 blowing in) they could start climbing down the stairs (about 33" each step).

The stairs ended at the third day (they kept record of the days with thir stomachs and sleep time, wich is pretty accurate). They left there the breos (torches made of sticks impregnated with tar from nearby oil ponds), and they carried on iluminated by lights that were just there, as big as a watermelon and clear as a bulb. Each passing day they walked faster, since they lost weight and corporal mass. They crossed 5 well marked places trough some huge caverns whose ceilings they could not see. There were (in one of the chambers) four sun-like lights, impossible to stare at, but surely not as high as the sun it self.

On this place grew some trees with good fruit, like cajúes, oaks, mangos, bananas and some lesser plants. Comparing with some Macuxies places, this chamber would have about 10 square kilometers of "passable" and vegetated surface. Some other sectors were out of reach and very dangerous, with boiling stone and creeks of "azoge" (quicksilver, wich they learned its use to gather the golddust, due the "garimpeiros" wich today pollute with it the Amazonian waters). After these five huge chambers, in a point beyond half way, they should hang to walls and move carefully, because they "flew" (They were in zero gravity like an astronaut).

The wind which had begun to blow outside, it wasn't an obstacle when they started the drop, but if they attempted it backwards, the turmoil of the whirlwind could drag them to the abysmal tunnel, and the corpse — battered about a thousand times — won't stop until one day of path down the cave. Respecting this cycle, starting their march against the wind (which was for their own safety) they climbed down three days on the stairs and after two days of march on a narrow stair-less tunnel, the wind blew back inside, hence they watched their steps since the days they departed, to not leave loose stones on their path wich would hit them in the back. Even with the wind in their favor — about day 7 or 8 of their march — they reached the place where "everything flies", which is the center of the Earth's crust. (The middle of the mass, magnetically speaking, which is not the geometrical center of the Earth, but any point in the middle of the thick of the crust).

Sometimes the wind was so strong, and instead of using the walls to impulse themselves, they should do it to stop and avoid being hit. The gravity-less travel usually lasted from a few hours to 36 hours. Sometimes they should hang to the rocky edges to metal pieces that were in the rock there before they passed by, and wait two days until the wind died. Then they followed the road characterized by creeks with cold water that passed trough the cavern and fell into a void, larger than the previous ones, where lied some brilliant stuff with the same shape of bee hives, about 10 meters of diameter, placed above a seedling, like a tree´s log, at a height imprecise by the memory of the last Macuxies who live remembering that, still with fear of retaliation from "the Big Men"

The travelers were gaining weight again, but they didn't get it all back, because they came out in "the land in the other side", where everything is lighter, the sun is red and it's always daytime, without night, stars or moon. They remained there a few days enjoying some nearby beaches, getting younger as the time passed by. (This reminds of Apollo who traveled to Olympus to rejuvenate). Macuxies knew perfectly the Atlantic ocean, since they were –outside- about 200 miles from the coast and this wasn`t the sea. The giants gave them some big and delicious fishes, and its meat didn't rot until two or three months after being fished. With this precious cargo, apples bigger than a human head and grapes fist-sized, besides a lot of body energy, they came back accompanied by some giants who helped them to carry the enormous weight they carried back. The returning trip started with the wind blowing on their backs, to have it again in there on the last stage of the journey, when they climbed the stairs the last three days , whose ruins exists nowadays.

The belief (or knowledge) of the Macuxies, is that if they follow the rules given by the giants, after they die here in the outside, they'll be reborn in there, among them. They tell that some Macuxies hadn't died, but they transformed (transfigured?) into half giants and they stayed inside. This required mainly, not having offspring in the outside.

Tragedy came to the Macuxies in 1907. Three british explorers, reached in the name of her queen searching for diamonds. Macuxi's lands still have some diamonds today, but it has been exploited since 1912 and there are almost none in there, making their extraction barely or non-profitable. When the English came, there was enough to please the queen and many greedy people who got rich, exploiting the native, but one of those "Authorized travelers to the center of the earth" made a terrible mistake violating the motto of their secret, and told the foreigners the entrance place.

One of them sent a letter to Her Majesty, repeating her a tale like this one, with some more details. In the beaches of the inner lands, there's an abundance of diamonds, just like there is in some carbon mines of serpentine, from ancient volcanic shafts, wich are today, precisely, those tunnels to the interior of the world. The three men went out (or went in) in an expedition, but they did not come back ever again. In their place, the giants came out, punished the Macuxies and they banned them from entering inside ever again.

After two years of poverty and angst (That zone, in the outer surface had diamonds — useless for them back then — but lacked fruit and fish), they chose to attempt a new contact with the giants, despite the banning. They traveled with hopes for two days, but they reached a point in the path where the wind came from a cavern they did not know. The original road had collapsed. Some of them returned immediately, but some other chose to follow the new and unknown path. Several months later one of them came back and told the others that they could come inside, but they could never go out ever again, because more English would come in their land and hurt them. Some of them refused to go, because the place assigned to them was one of those huge caves. Some accepted to go and never came back.

Years later, the garampeiros started to arrive, to pollute the rivers with zarandas, resumidoras and quicksilver and to destroy the minds of the Macuxies that stayed behind with drugs. They also clouded their minds with whips and polluted their race, raping their women. During June or July of 1946 there was a huge collapse in the tunnel, destroying almost all the stairs. Today there's only some steps at the beginning of it and a huge and unclimbable pit where the wind blows with different rhythms. Some old Macuxies who escaped the English whip, and still live counting their age in moons, don´t give up entirely to forget the Lost Paradise. A suitable phrase, because they knew it... and lost it.


Questions or Comments:  Email me!